I just made an executive decision. Instead of calling posts that are all about fashion news – Buzzin, they will now be called Trendin. I probably should have called them that from the beginning, hence the name Trend Hungry, but I just now decided it, so let’s roll with the punches.

Fashion and coffee seem to go together. Many fashionistas, such as the Olsen twins, can be spotted with jumbo cups in hand from Starbucks. That with big sunnies, a fashion DO. But an $85.00 coffee-stained shirt by Alexander Wang for Starbucks turning the big 4-0!?!? 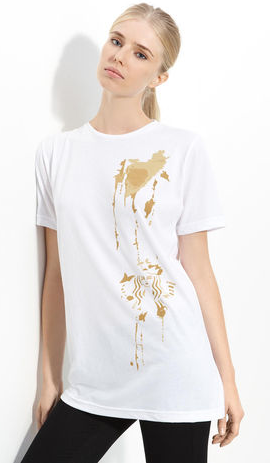 It’s Unisex, but in my opinion, will block you from ever getting to have sex. Thoughts? No one gets excited by spilled coffee.