Midriff-revealing bustiers are being worn as cropped tops. This seems like the norm for performance garb, but should this trend make it off the stage and be worn out in real life? Well, that’s what we’re trying to figure out now that Miley Cyrus, Kim Kardashian, and Carly Rae Jepsen have all been seen sporting them. Carly Rae looks fun and performance ready, while Kim K and Miss Miley are wearing them as actual shirts, as in going to run errands in what’s meant to be worn in the bedroom. Well Miley wore this on Jay Leno, which is late-night talk.  But what about us normal people. Should we wear this to the mall or to Starbucks when in need of another pumpkin spice latte? 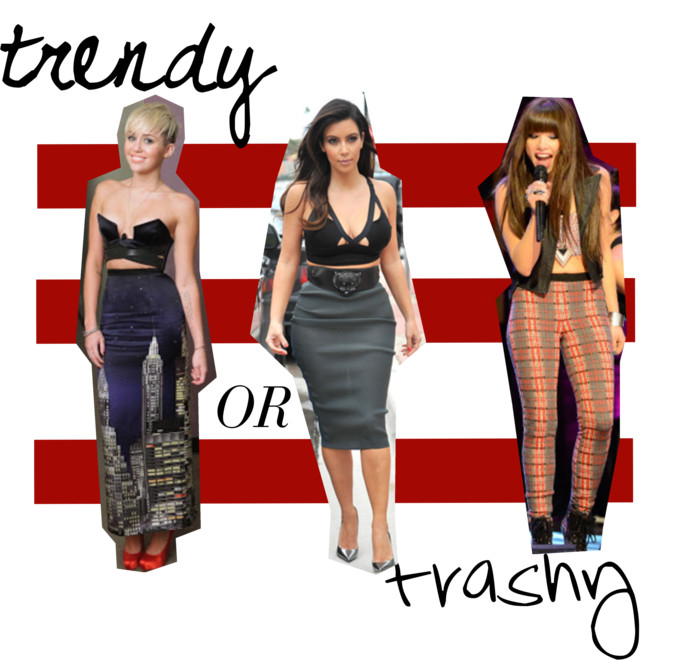 If it were August and you were on your way to a concert or a drag show, then maybe. But it’s October. It was 40 degrees the other night in Philly (Trend Hungry Headquarters) and there’s no way a bustier is appropriate for a late-night Wawa run.

The Trend Hungry Verdict: Trendy if you’re performing or hitting the club. Trashy to the office. C’mon Kim, not chic with that see-through pencil skirt and wrestler belt.

So what’s your stance on bustier tops? Is it fashionable or just a big faux pas? Comment below. Also, scroll through the showroom below. All are perfect for a skinny budget.

BUT! If it is S/S, a flirty floral bustier would definitely work with a skirt or high waited shorts, right? So then if we cover the rest of ourselves up appropriately, there IS a way to pull off this risky look!
Using neutral tones (think fall colors), soft fabrics, and the right cut, I kinda love it.
The key is to finding a bustier that is long enough (half-way between bra line and belly button)and high-waisted skirt (or pants) so there’s only a sliver of skin showing!
A camel or beige bustier paired with a high-waisted (which is a must) oxblood or maroon maxi skirt and tan booties looks super chic! Add leather jacket or chambray shirt on top and Voila! Bustier gets upgraded from trashy to classy!!

Definitely fun for the stage, but a little risqué otherwise. Unfortunately celebrities wear whatever they want and get away with it, but not sure this trend should translate into real life unless done in a tasteful manner (good points Mackenzie!)