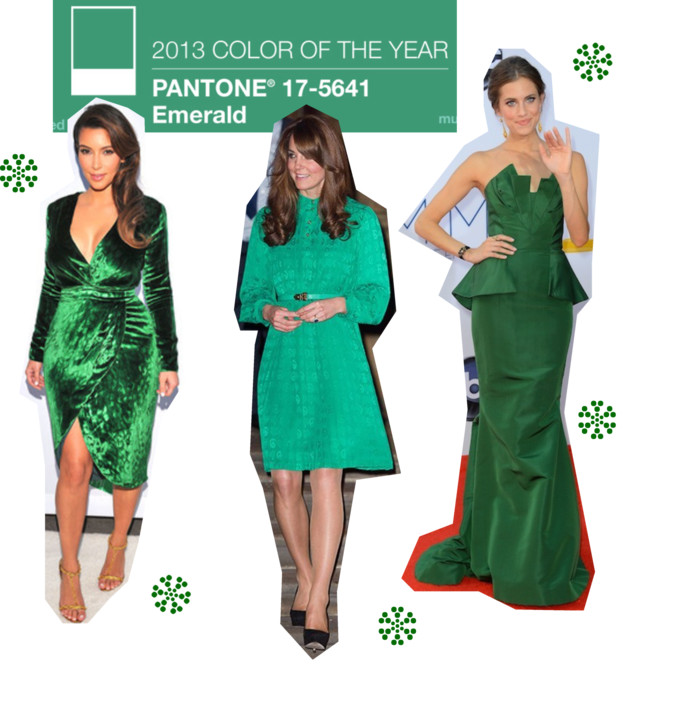 You’ve probably already heard the fabulous news. Pantone has announced emerald green has been announced as the color of 2013.  The new year is only a few weeks away. I don’t know about you, but I’ve been giving my 2013 style some serious thought. And now, I’ve got to add emerald green to my shopping/deal-hunting list.

Before we take a gander at budget-friendly emerald green, let’s take a look at this past year. Were any celebs wearing this money shade and setting the trend ahead of schedule? Why, of course they were. Kate Middleton, Allison Williams (Katy’s Perry‘s new BBF / my favorite on HBO’s Girls), and Kim Kardashian all glammed it up in green. In fact, Kim K.’s deal with Midori had her in emerald green quite a bit.

So, how about you? Where do you come in? Well, a few ways. You can rock the trend with green jeans to make a statement. Or pick the hue as an accent color and use a couple green accessories to show off a pop of color. Now it’s your turn to play editor and leave a comment below sharing how you’re going to be wearing emerald green this season.

I was SOOOO excited to find out that this was the Pantone color of the year!!!!! Great post! xx

Thanks girl! I’m loving this shade too! Can’t wait to see how you’ll wear it! – Jessie

whoah this blog is excellent i really like studying your articles.

Keep up the great work! You recognize, lots of
individuals are searching around for this info, you
could aid them greatly.