Kim Kardashian Has a Baby On Board & Minimalist Style: Steal Her Style For Under $25! 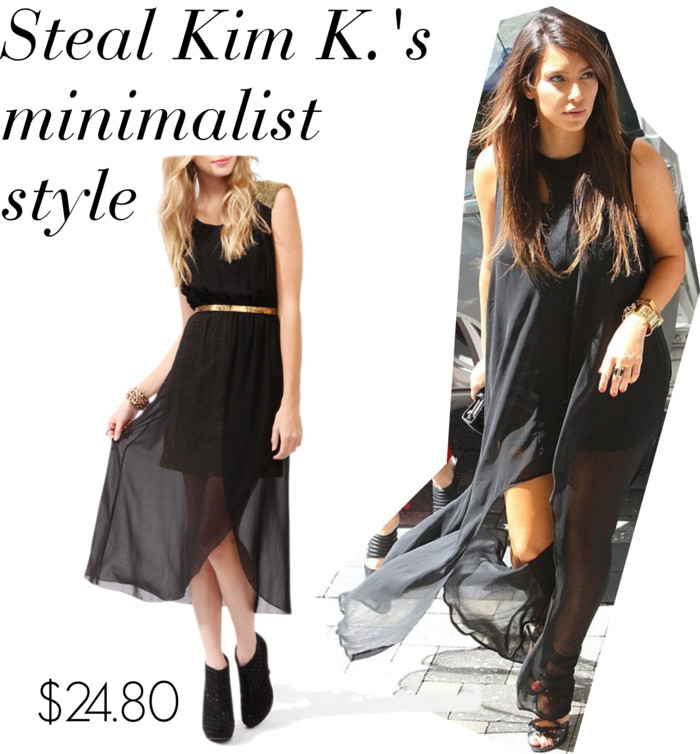 By now you know that the biggest earning Kardashian is preggers with Kayne’s baby. Of course, it’s the talk of the new year, but I want to focus more on what I think must have been Kanye’s master plan. Then we’ll go into how to snag her minimalist style, ya dig?

First they’re friends. Then they’re still “friends”. Then his stylist guts her closet. Next up, she’s dressing better (matching Kanye) and goes to a fertility clinic with Khloe. And now, they’re becoming the most stylish couple and are expecting. I think Kanye wants Kimye to be the new stylish “it couple”, like bigger than the Beckhams. Anyone else see this? 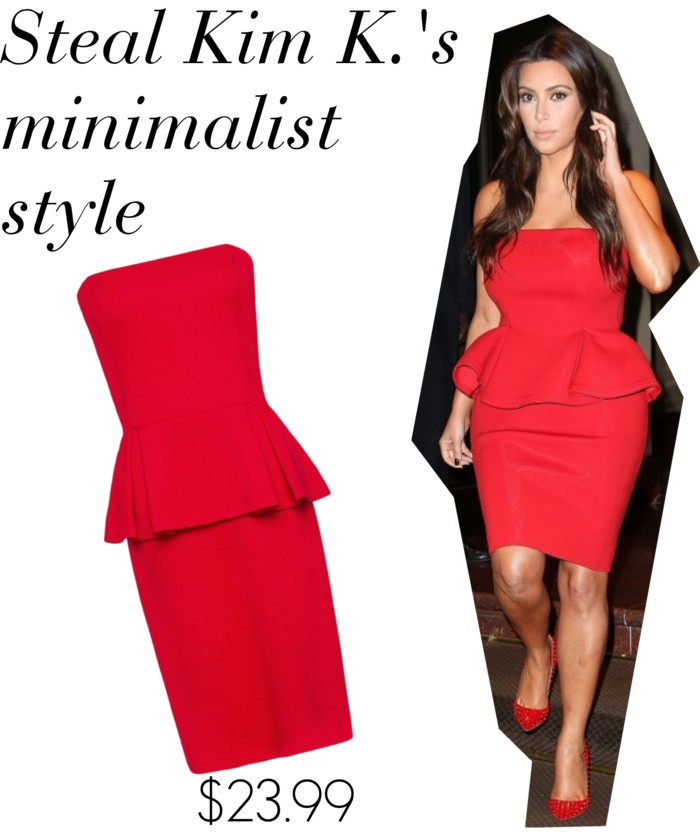 Okay, now on to Kim K.’s style transformation. Before, Kim was a trend addict, likely one of the biggest fans of this blog, obvi. Now, she’s steering away from her animal print, fake lashes, and too-sexy silhouettes. I wonder if her line(s) will follow suit?

Instead of  loud patterns, Kim’s color palette now consists of a lot of black, white, and beige, with the occasional pop of royal blue or red. I know, it sounds boring. But there’s a reason behind this muted scheme. Kim is naturally beautiful and these minimalist designs highlight her natural beauty and allow that to be the focus, not the clothes. And in turn, that makes the clothes look even better.

Don’t think you have to shop designer to snag her new chic style. All you need if a little black dress, that shows your figure without giving too much away. Or try her look with some color and copy Kim’s peplum look for under $25 from Mango. And the pic of her in that high-low hemline, well, that will be shown on her new show Kourtney & Kim Take Miami, so get the Forever 21 version before it’s gone.

And if that’s not enough, here’s a slew of dresses for under $25 that will allow you to be the focal point at a nice price point.

Throw It In The Bag: 5 Essentials For Your New Years Eve Bag